Tweet
The big news in digital signage circles this week may require you to pull out your acronym dictionary. You see, ExpoNation, the parent company of the Digital Signage Expo (DSE), announced the creation of the Digital Signage Federation (DSF), an organization to rival the Digital Signage Association (DSA), which is owned by NetWorld Alliance (NWA). Can the two associations coexist and thrive? Is the DSA SOL? Could the DSF be DOA? IMO it's a bit more complicated than thinking that one group or the other will prevail to the detriment of the other. After all, we're all in this together, right?

All kidding aside, what the industry is now facing is a showdown between two for-profit groups backing two different industry organizations. And I say showdown because, despite whatever political posturing may be going on in public, it's clear to all that our tiny little industry simply doesn't need two dedicated organizations to foster education, advocacy and similar goals. Simply put, NetWorld Alliance, the publishing company behind DigitalSignageToday.com, has been nurturing the Digital Signage Association for several years now. The group has been very successful in signing up members, and has held a number of well-attended webinars and talks, but has been hampered by the fact that they're essentially owned and operated by NWA. Meanwhile, many digital signage companies have been critical of ExpoNation for running a successful trade show but not doing enough to be an advocate for the industry. 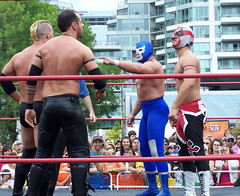 Image credit: C'est la Viva
While the formation of the not-for-profit Digital Signage Federation would seem to be a sign of ExpoNation's desire to play nice with the industry veterans that pay for all that exhibit space at the DSE, the announcement of the DSF was not met with universal enthusiasm. For example, Adrian Cotterill -- perennial fuss pot that he is -- wondered whether the DSF is "really riding to to the industry's rescue as they described late on Wednesday or is this a knee jerk reaction and an attempt to protect [ExpoNation's] own business interests in the trade show arena?" That's a fair question, since in recent months there has been plenty of gossip in the channel about the DSA pressuring ExpoNation to cede a bit of control of the DSE show over to them (or a similar entity). If that's true (and I'm not saying it is -- you should know it's dangerous to believe everything you hear!), ExpoNation's move to create another organization could be seen as a defensive play. And by making it a bona fide 501(c)(6) not-for-profit, they also nicely side-stepped a lot of the criticism handed down to the DSA and their owners, the for-profit NetWorld Alliance.

Can't we all just get along?

I'd really, really hate to see two anemic organizations competing for resources and mindshare, so it'd be best for ExpoNation and DSA to work out their differences. As Adrian also noted in the article I mentioned above, the DSA folks were due to vote on whether to detach from NetWorld Alliance and become an independent not-for-profit entity next week. With 420 members and a fair amount of inertia, it seems like the best possible outcome would be for the DSA to detach, establish themselves as a new 501(c)(6) -- or become a chapter of some other similar organization -- and have Exponation serve as a contributing member. Or if the DSF really is properly incorporated already, perhaps the DSA simply transfers their membership (and even their name) to the DSF. Either way, the industry would wind up with a single, unified organization with an instant member base, sound financial backing, and an appropriately open and unencumbered legal standing.

To an outsider like me (WireSpring doesn't belong to either the DSA or the DSF), a single combined organization seem like the best outcome. However, I'm sure that the people looking out from the inside have their own opinion of what the ideal outcome of this situation would be. And considering that next week's DSE show will feature both the general meeting of the DSA and the formal introduction of the DSF, it seems safe to assume that some significant changes will be coming to one or both of these groups in the near future.

0 # Anonymous 2010-02-18 19:20
Either is better than OVAB - $20,000 for a non-voting membership. NO THANKS.
-1 # Bill Gerba 2010-02-18 19:24
Yeah, OVAB membership is expensive for everyone except those who can afford it :) But I think it was created (and priced) for a different purpose than one of general industry advancement. I just don't want to have to fork over money (and more importantly, time) to more than one entity that may or may not produce anything of value. That's the reason we've been a POPAI member for 5 years now, but haven't yet joined DSA.
+1 # Gary Halpin 2010-02-19 00:44
DS is getting to the point of having more acronyms than the government, and I'm not sure if that is a good thing or not.
Refresh comments list
RSS feed for comments to this post
JComments