Tweet
Back from a week in Las Vegas and the 2009 Digital Signage Expo, I'm struggling to find a way to summarize what I saw, heard and experienced that won't just be a rehash of what so many others have done across the web already. Sure, there were lots of great conferences and presentations. And there were lots of booths showcasing new and interesting products. But I didn't get to see most of those, and I didn't get a chance to meet up with a lot of the people that I had on my list. Thus, any "comprehensive" overview from me would be woefully incomplete. Instead, I'd like to go through some of the things that struck a chord with me -- especially the developments that give some perspective on where our industry might be headed.

The sessions: Content Day, Mobile and Gestural Signage, and more

I had the opportunity to speak at sessions for both the "Content Day" track and the "Mobile and Gestural Signage" track on Tuesday, before the expo hall opened. The good news is that the Content Day room was mobbed -- it was standing room only the whole day through -- which means that there are at least 120, maybe 130 people out there who understand how important this stuff really is. That day's festivities began with a creative brief smack-down, with four different creative houses competing for a hypothetical contract with Samsung. There were several other good presentations, including a very interesting and illustrative panel session with a bunch of content lawyers at the end of the day. What I learned from the lawyers: if you're doing anything that effectively allows you to make money off of somebody else's content, you need permission. What I learned from the audience members: many companies are too cheap/small/busy to get permission, so they're going to shoot first and ask permission later. 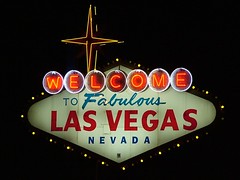 Image credit: Sid/Stephen
My favorite quote of the day came from Show + Tell's Phil Lenger, who gave a fantastic presentation on developing a creative strategy (echoed on their pretty killer new website too). His fundamental insight: your digital signage network simply can't be compelling all the time, so don't try to make it. Strive to be really, truly compelling sometimes, so that your audience will come to appreciate your quality content, but not get tired out. It's one of those counter-intuitive thoughts that makes so much sense after you've worked on a network -- or ten or a hundred. He also has some pretty charts and graphs that you might want to download from here (PDF format).

I didn't get to catch much of the Mobile and Gestural Signage event. However, the one event that I did participate in (along with Jay Patel from Bluefire Digital and Stephen Randall from LocaModa) demonstrated that the audience there, if somewhat smaller, was no less enthusiastic and knowledgeable. Between talking to people at that event and noting the number of mobile- and touch-enabled screens on the floor, it's clear that interactive digital signs are the next hot thing. Which means I can dust off that old article about kiosk-signage convergence from 2004 and pretend it's all new :)

The show floor: Solid turnout, a few new toys, and signs of maturity

As I mentioned, I didn't really get a chance to spend a lot of time on the show floor aside from walking to or from meetings. There was a lot of square footage, and a LOT of exhibitors. Conversely, floor traffic looked a bit down from last year (though it might have been an illusion because there was so much empty space). But the folks I talked to were pretty happy with the traffic levels, and generally thought that turnout was good. It certainly could have been much worse given this economy. Every cab driver I came across made an effort to tell me that business was down 30% from last year. I think they were mostly fishing for bigger tips, but I'm sure the story was rooted in truth somewhere.

Aside from lots of new ways to interact with screens, it also seemed like everyone and their brother were also flogging 3D screens of some sort or another. I've been watching those things evolve for years, and this is the first time I've come across one and thought "you know, that might actually work." The manufacturers seem to be figuring out how to improve brightness and viewing angle. I understand they're getting cheaper, too. Along the same lines, the small form-factor, low-power media player seemed to come into its own at this year's expo. There were easily a dozen companies on the floor flogging tiny, fanless boxes for digital signage. Too bad most of them still cost upwards of $1,000. But the trend towards embedded devices and reduced power consumption seemed to be pretty strong.

In all, I was actually kind of satisfied to find myself bored after just a few minutes of perusing booths at the DSE. We're a maturing industry now, and while there are still hundreds of vendors out there essentially trying to solve the same problem over and over, at least now the solutions are starting to look more like one another. Were there new, cool technologies that might be able to make a meaningful contribution to the industry? Absolutely. But the fact that most companies on the floor were offering "better mousetraps" instead of "new paradigms in mousetrap technology" is an indicator that maybe the flood of hype will begin to subside and we can get on to some real business.

Other thoughts and observations So there you have it. Another year gone, and another Digital Signage Expo over. (Well, technically they have another DSE show coming up in September, but I'm referring to the flagship event.) For me, the show was a good opportunity to see what the industry has to offer and meet up with people I normally only get to talk to on the phone or over the 'net. If you made it out there, I'd love to hear your perspective on how the show worked for you, and whether you think it will help you to meet some business objective in the future.

0 # Chris Kubas 2009-03-02 21:46
One of my favorite was part of the Magnetic 3D booth. A small company that was operating there screan in 2D and 3D with there cell phone alone. It was instant. They also showcased thier interactivity, text to screan and live sports games and music. I believe the name was Fithwindow. Very cool
0 # Fish Boy 2009-03-02 21:55
I can swim like a fish but not eat the little beggars (nor the big beggars either to be fair). Great summary of the event - we most liked the Touch TV Networks stuff seen sharing a stand with CHILIN
0 # Pat Hellberg 2009-03-02 22:09
I won't/can't comment on the quality of the panel that I moderated, "What's next at retail?" . Rather, I can cite the size of the audience. Our panel had the dreaded time slot: 3PM, day two. I anticipated we would be talking to ourselves. But no. We had over 50 people in the audience. Shocking. (Bill, maybe you remember that dreadful conference in Ft. Lauderdale when there weren't 50 people in the room on day one, session one. And that's counting the bus boys.) Our panel's big draw was Mike Hiatt, formerly of Walmart. Mike addressed, as he put it, "the elephant in the room", his recent departure, with wit and a sense of humor. Thanks also to fellow panelists Gale, Brandon and Vincent. All things considered, 50 die hards hanging in/staying awake/asking questions during the late session on day two is encouraging to say the least.
0 # Jake 2009-03-03 01:58
It was my first DS show. I enjoyed it alot, but I could only handle one day and a few hours on the show floor because every vendor "was the best you could buy on the market"! Although, I did determine which vendors to choose after coming home! Bill, I heard your presentation on content was spot on and fantastic. I was wondering if you were going to post any of it on your blog? Thanks, keep up the great work and take care! Jake
0 # Stephen Randall 2009-03-03 14:25
Good to finally meet you at DSE. You did a great job moderating the Mobile Interactivity Panel.
0 # Bill Gerba 2009-03-03 14:57
Chris: I also saw a couple of demos with "instant" mobile response via alphanumeric. Last year it was all about MegaPhone. This year it seems like they have some competition. Adrian: Congrats. You, my friend, have just given yourself a new nickname. Pat: Yeah, I remember that conference. I'm just glad it was local :) I got some feedback on your session, and as you noted it was mostly about Mike Hiatt's departure. While I know you can fill a room, I think a lot of people simply couldn't believe that after how much Walmart has hyped their Smart Network he was getting laid off. Jake: Well, **we** are the best you can buy on the market, so you obviously got duped. Stephen: Good meeting you face-to-face too, and thanks for the compliment.
0 # John Moezzi 2009-03-03 18:47
When you say "In all, I was actually kind of satisfied to find myself bored after just a few minutes of perusing booths at the DSE. We're a maturing industry now, and while there are still hundreds of vendors out there essentially trying to solve the same problem over and over, at least now the solutions are starting to look more like one another." I tend to agree with you. New digital signage software entrants are better served by bringing to market value added components to enhance industry leading platforms, like FireCast, that have at least 10 years head start. Time to market will be dramatically quicker and they would have a shot at making an impact.
0 # Ediz Burla 2009-03-03 22:04
Hi Bill, Congrats, the panel was great. It's my first time in DSE at Vegas, I did enjoy the expo. I found the seminars good enough to draw attention to the opportunities industry is providing. There were lots of spots emphasizing the importance of the content and suggesting several content resources. I've not heard of some before such as Sony Pictures rich content archive, no doubt Sony provides good stuff for the industry. Of course pricing matters... In short, I found the DSE and most seminars informative and educative. Ediz Burla TVeez Turkey, VP Marketing
-1 # Jay Patel 2009-03-04 00:39
Bill, It was nice to meet you at DSE! I'd like to view your presentation for the content seminar.
0 # terihong 2009-03-05 01:34
"The folks at BroadSign had the good sense to keep Dave Haynes locked up in a small plexiglass box a'la David Blaine for most of the show. Surely they were worried that his clbrit was such that out in the open, he would be overwhelmed by hordes of die-hard fans pleading for his autograph." Love it...
0 # Bill Gerba 2009-03-05 19:37
John: couldn't agree with you more! (obviously) But I do think we're starting to move in that direction -- see LocaModa and other "application" providers for evidence. I think it will be even faster and better once we announce some interoperability standards. Ediz: yeah, content really should have been front-and-center instead of in a little section in the back. Perhaps they'll revamp next year's floorplan to make a big content area right in the middle of everything (you listening, Chris Gibbs? ;) Jay: Likewise, nice meeting you. I'm in the process of turning the content day presentation into some blog articles, so they should be going up pretty soon. Teri: Thank you, thank you. I'll be here all week. Try the veal.
Refresh comments list
RSS feed for comments to this post
JComments