Digital Signage Design: The Art and Science of What's Effective

Tweet
As any regular reader of this blog knows, I'm very interested in learning how to measure and improve the effectiveness of digital signage content. Over the years, we've experimented with hundreds of spots on dozens of networks, and used that data to come up with an ever-growing list of best practices for content creation, screen placement and campaign integration. However, while I've tended to focus on the "science" of digital signage, plenty of others have chimed in -- on this blog, at meetings and conferences, and in other news articles -- about the art of great digital signage design. In other words, some people have found success even while ignoring all of the things that my team and my clients regularly rely upon to improve effectiveness. Consequently, I was surprised to hear Jonathan Cahill -- an author and advertising consultant who has worked for big agencies like McCann Erickson -- proclaim that there's no clear-cut way to guarantee ad campaign performance. Cahill studied 27 years' worth of ad campaigns that were judged to be "effective", i.e. they led to significant sales increases for the advertised products. He concluded that data-driven approaches did not typically outperform those campaigns backed up by creative, emotion or common-sense strategies. That is to say, the science-driven processes we spend a lot of time focusing on aren't necessarily any more effective than artistic processes, at least when it comes to making an effective ad campaign.

What do great campaigns have in common?

Cahill's book is called Igniting the Brand, and admittedly, I haven't read it yet. And since Amazon seems to be sold out right now, it may be a while before I do. However, AdAge recently posted a nice three-minute interview with Cahill about his findings. Essentially, the author examined case studies from 115 particularly effective campaigns executed over the past quarter-century to see if there were any commonalities. What did he find? In short, there was no clear "formula" for building an effective campaign. Makes sense so far, right? Further, he suggested that when agencies attempt to put a process in place for rigorously or "scientifically" improving an ad, it can often backfire since the insight necessary to make an ad connect for a given brand or product is not quantifiable. Finally, he argued that today's trend of focusing on hard data to make decisions and optimizations might cause otherwise savvy marketers to miss key opportunities, since the discoveries that lead to these opportunities are born of an aha! moment, and not from pouring over reams of spreadsheets. (That last argument reminds me a little too much of Malcolm Gladwell's Blink.) 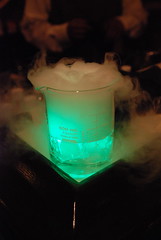 Image credit: Josh Hallett
I'm certainly not in any position to pass judgment on Cahill's arguments: I haven't read the book, nor have I spent decades in an agency setting. But I readily agree that there isn't a rote formula for making great content. As producers like Pat Hellberg are always quick to point out, digital signage content depends on art as well as science -- and great art requires talented designers. There's no getting around that point. However, I'm ready and willing to wager that virtually any piece of out-of-home content could be made more effective by following our best practices for digital signage content, like including a call to action, optimizing for contrast, and placing screens in appropriate locations. Our process, if you can call it that, can be thought of almost like an editorial review. Take your content, which was built around some strategic or campaign goals, and run it through our best practices list. Does the design feature an offer on the screen at all times? Is the text big enough to be seen from where your viewers will be? Does it convey meaning even only at a glance? If you answer "no" to any of these, consider whether the perceived benefit of answering "yes" justifies making changes. By the end of the list of questions, you still have your original piece of content. But now it's polished and honed for display on digital screens. As an added benefit, the process works for non-advertising content, too. Anything that's trying to get a message across to viewers can benefit from a walk down our best practices list.

So while I concur that there's no set formula, I think it's unwise to suggest -- for digital signage design, at least -- that there's nothing to be gained by following a procedure at a certain stage of your content development efforts.

Another point that I certainly wouldn't argue is that a similar process exists at the idea stage of content design. To me, campaign creation and campaign execution are two entirely different things, and it's unlikely that the approach for the latter can apply cleanly to the former. Ad campaigns need to rely on some data to make basic assumptions about the audience. For instance, Summer's Eve really doesn't have to care what men think of their brand. But much beyond that, marketers have to rely on instinct and emotion as much as anything else to build a solid campaign and strategy -- after all, they're trying to elicit an emotional response from viewers. Getting back to my point above, once they hand off their ideas to the content creators, a little bit of procedural polish can go a long way towards turning a merely good ad into a great one, from an effectiveness standpoint.

I've said it before and I'll say it again: a lot of the content on digital signage networks these days is utter crap. We're firmly a decade into our industry's evolution. Surely we can do better. But day in and day out, I come across content that's illegible, not memorable or just plain ugly. Considering that we've had guidelines posted on the Internet for years now that could address at least two of those issues, it just shouldn't be that way anymore. But still I'm hopeful that as more people discover at least some of these best practices (here, elsewhere, or from their own trial and error), they'll start using them to optimize future content to be cleaner, clearer and better-performing.

What other aspects of building or managing a digital signage network could be improved with a process? Which things are better left to intuition? Leave a comment and let us know.