Tweet
It's been a long time coming, but Arbitron has finally updated their Out-of-Home Digital Video Display Study, which you can download from their website (PDF format). Since 2005, this study has investigated the different venues that host digital signs and the people most likely to see them. I've appreciated Arbitron's efforts in our industry over the years for a few reasons. First, they're a big, well-known and (mostly) trusted source of metrics for all sorts of media, so their attention lends us both visibility and credibility. Second, while they focus on advertising-driven networks, their surveys generally give a more balanced view of the penetration rate across numerous venue types and business models. And third, they tend to give away good chunks of their findings for free, which is great if you're cheap like I am. Let's take a look at Arbitron's latest study in more detail.

Straight out of the document's introduction section comes this statement, sure to be used in business plans and VC pitches for some time to come:

Out-of-home advertising, in its many forms, has proven to be an effective way to reach busy consumers. Instead of relying on the medium to bring the consumer to the message, advertisers use OOH campaigns to put the message in the path of consumers as they go about their day. Digital video display networks take OOH advertising to the next level. They are designed to stand out in cluttered environments and engage shoppers at the moment when the buying decision is being made. In many cases, they are the "last voice" to influence consumers before the purchase event.

Arbitron and their partner Edison Research conducted interviews and read media exposure diaries from nearly 1,700 participants to come to that conclusion. In doing so, they have given us a new degree of insight into the socioeconomic and demographic characteristics of the people who see digital signage networks. Remarkably, they found that "out-of-home digital video displays as media reach two-thirds (67%) of U.S. residents aged 18 or older each month," and of those, 76% noticed them at multiple venues. That last part is really interesting to me, because it's a number that I've often wondered about, but had never seen any research on. (Since none of my own clients have screens in multiple venue types, it's been impossible getting them to pony up for research on the subject.) Whereas digital screens could once count on novelty to guarantee a certain amount of visibility, that's definitely not the case any longer -- not that any of you would have suspected it was, of course.

Here are the results organized by venue type: 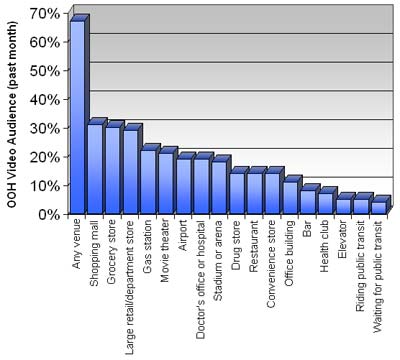 So, over 155 million adults in the US notice at least one digital sign every month. They say they're most likely to see them in a shopping mall (31%), supermarket (30%) or large retail/department store (29%), but even smaller venues that drive less traffic show some eye-popping numbers. For example, drug stores, restaurants and convenience stores each grabbed about 14% of adult US eyeballs, for a total of nearly 100 million actual impressions each month.

Diving deeper into the demographics

Did you know that (according to this report, anyway): Yeah, neither did I. And personally, none of these aggregate statistics are terribly interesting to me. But it's noteworthy that they're actually quite normal-looking, and don't show any unusual trends that might make the medium look even more different than other, more traditional media. Yes, we know the out-of-home digital medium still skews young (which isn't necessarily a bad thing -- just ask any marketer). But so do the Internet and other new media like mobile.

Arbitron also provides detailed statistics for each venue type (e.g. supermarkets, transit hubs, doctor's offices, etc.) which do show some interesting -- but not unexpected -- demographic trends. Again, the information is useful and illustrative of what a "typical" network in each of these venues might look like, but offers no surprises. And that's a good thing.

How can we use this information?

Well, the simplest approach might be to turn the numbers on their heads: while 31% of respondents recall seeing a digital screen in a shopping mall, that means that 69% of people did not see screens there. Of course, there are several potential causes for this. First, not everybody goes to the mall at least once a month. However, the NIH estimates that (at least prior to the economic meltdown), 70% of Americans visit malls each week. So conservatively, there's another 40% of Americans who are in those venues but don't recall seeing screens. Second, not every mall has digital screens -- I know, I know, it's hard to believe. But I'm pretty sure that somewhere out there we could probably find a mall totally devoid of any kind of digital signage. I don't know what the percentage of digital signage haves to have-nots is. But again, it doesn't seem high enough to account for this massive disparity, since a difference of 40% equates to more than 90 million people each month. I'll leave the estimates for other types of venues as an exercise for you.

The Arbitron data can also be used to check against older published statistics. For example, Arbitron's study seems to confirm some of the data produced by Nielsen for Adspace Networks back in 2007. At the time, Nielsen indicated that 47% of all mall traffic saw the ads on at least one Adspace screen. Based on the aforementioned NIH estimate, this equates to about 33% of the US population. Arbitron's research says the number is 31%, which is pretty close, and almost certainly within the margin of error. Likewise, the Nielsen data indicated that women 18-34 and men 18-24 index highest among mall visitors, which is mostly in line with Arbitron's own findings.

I know that a lot of people are waiting for some magic bullet to solve their ad sales and VC funding challenges. You know, a remarkable figure from a big research company or agency that will put to rest any lingering doubts over our medium's viability as a communication channel. Unfortunately, the Arbitron Out-of-Home Digital Video Display Study 2009 is not it. But it's still solid research from a reputable firm that specializes in dissecting media exposure. And no matter how you read it, it's clear that digital signs have a pretty serious penetration rate -- reaching two-thirds of the adults in the US every single month. So if you haven't looked over the Arbitron study yet, I encourage you to take a few minutes and check it out.

Were there any hidden surprises that I missed in this report? Did the findings provide you with some useful insight that will help you and your business? Leave a comment below and let us know!

+1 # John Garth 2009-08-06 21:23
I have read most of the articles regarding viewership and price paid per ad on digital signage, especially as it relates to Adspace. The challenge that I continually come up against when approaching buyers of media sold at any price is: "I realize that you state 47% of the people are seeing an ad and that may be believable and cost worthy, but when divided by the number of ads rotating on the screen, 16 or more, how can you justify the expense at any price? What are the chances that someone will see my ad?" The number of signs should not make a difference to this equation because the 47% are seeing a single ad. The second concern is that "no one is standing in front of the media long enough to get the entire message". So, 15 second spots are too long for people that are convinced with a glance and 7 second spots are too short to have a perceived value. I would love to see a new blog regarding current pricing vs. costs and to know your thoughts regarding my comments. Thanks for the great articles.
+1 # John Gibbs 2016-12-08 17:20
Illuminated Mobile offers digital mobile billboards in Chicago and all campaigns are exclusive to one advertiser. Additional benefit is ads are on three sides of truck and at eye level. We can do place-based or mobile and target geography within 200 miles from Chicago.
0 # Bill Yackey 2009-08-07 14:33
Bill, Nice post - I've spend the past day and a half breaking down the report as well. I was enlightened by the flipping around of the numbers. Bottom line is, there are still a significant amount of people that flat-out do not notice digital signage. That is a problem that everyone is working hard to fix. And true, there are many malls still without signage. Even here in Louisville, KY (U.S.'s the 16th largest city :) ) both GGP malls are sign-less. Here is my take on the report, as posted this morning: http://digitalsignagetoday.com/article.php?id=22795&f=1
0 # Bill Gerba 2009-08-10 17:02
John, the problem you describe in your first paragraph is definitely indicative of how traditional media planners continue to approach our industry. Yes, if you use a plain old CPM calculation, the CPMs for digital signage networks can be "high" compared to TV, cable, etc. Of course you and I know that to evaluate a medium based on one number is absurd, but that's how a lot of old-school people think. There's no silver bullet solution to win this argument -- pointing out the higher value of marketing near where the product is sold, or suggesting research to prove better returns/ad are two methods successfully employed by some networks and ad sales folks. To your other note about the length of content, that's something that we and many others have spent a good deal of time on. We recommend that you count on no more than 1 - 1.5 seconds of visual attention, so while there's nothing wrong with making a longer ad -- even :30 or a minute -- it must be composed in such a way that each "segment" is composed of "shots" that can communicate some value in that short 1 1.5 second period of time. Here's more info on the approach: [[http://www.wirespring.com/dynamic_dig ital_signage_and_interactive_kiosks_journal/articl es/Making_great_digital_signage_content__Composing _shots_and_scenes-447.html|digital signage content: composing shots and scenes]] Bill Y: Thanks for the tip, will check it out shortly.
Refresh comments list
RSS feed for comments to this post
JComments