"We've been publishing digital signage cost estimates since 2004, so this year we wanted to get a broader sampling of what people think the products should cost," said Bill Gerba, WireSpring CEO and Senior Writer for the Digital Signage Insider. "The survey results confirmed that digital signage is more affordable than ever before. In fact, the cost of implementing a 100-screen network has dropped nearly 23% in the past year and nearly 50% since 2004. With such a large drop in the capital requirements, there has never been a better time to get into the digital signage business as a network owner or operator," he added. 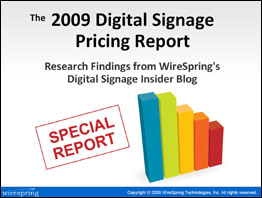 The 2009 Digital Signage Pricing Report analyzes the following components: Based on a fairly typical, 100-screen network, the total cost of each digital sign is $4,355. This includes 3 years of service fees, but excludes related costs such as the personnel who manage the content.

Other key findings from the report: Methodology

The survey was conducted during July and August 2009 using the PollDaddy online survey tool. 223 total responses were collected. Most respondents were readers of the Digital Signage Insider blog, though some may have received the survey via a friend, colleague or social network notification (e.g. Twitter). To determine the typical market pricing for each item in the study, WireSpring also conducted phone and email interviews with approximately 30 network owners and operators, and obtained pricing from an additional 30-50 vendors.

How to get the report

To download the free report -- with over 60 pages of informative graphs and charts -- please visit /reports/. A detailed summary of the findings is also provided on the Digital Signage Insider blog, in the article titled "The 2009 Digital Signage Pricing Study: Costs Have Fallen 23%".

Return to the press release index